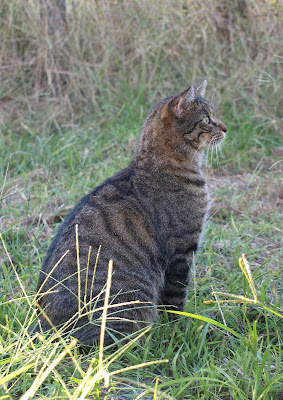 This cat might look as though he is seriously contemplating something. 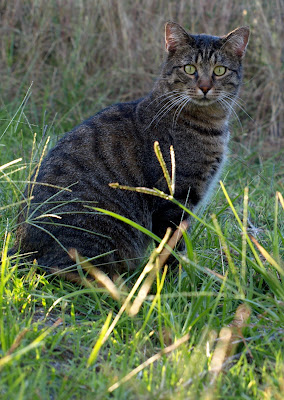 Those eyes do have the look of intense intelligence. 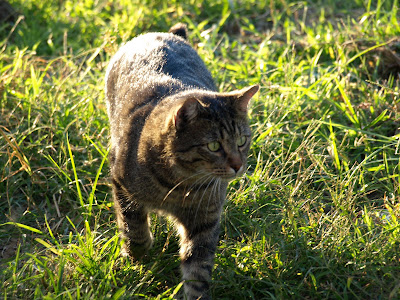 He does appear to have the haughty demeanor of many a cat!
BUT truth be told, he still chases his tail. A few weeks ago he "went missing" as the media puts it! He wasn't hanging around in the bathroom during my bath, snagging my washcloth with his claws and swatting at my razor as I attempted to shave my legs! All was not right in our world. We called out the front door, called out the back door, and looked in the garage. Finally we gave up for the night and went to bed without his furriness alongside us. The next morning, while getting ready for work, I again called out the back door, called out the front door, and looked in the garage. I also looked in the garden shed. Still no cat. Feeling quite worried, I went to get a sweater from the hall closet before leaving for work. I opened the door and the cat blinked at me, got up, stretched and walked out of the closet! I guess he never heard me calling out the front door just a few feet from the closet! On my way to work, I called my husband to tell him where I finally found the cat. THEN he remembered going to the closet for some batteries and the cat nosing around inside.
I guess this shouldn't surprise us from a cat that tears through the house jumping over the dogs and skidding into walls.
My husband named him Beasty, but I usually just call him Cat. Most often screeched across a room, "CAT".
Y'all come back,
Lorilee