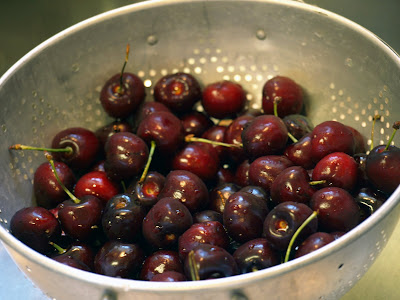 Our local newspaper has a weekly food section and it recently had a Cherry Pie recipe in it. It called for fresh cherries which I had never used. It sounded really yummy, so I decided to give it a try. I bought some cherries on my last trip to Wal-Mart. I looked around the kitchen section, but I could not find a cherry pitter. Oh well, I'd worry about that later! 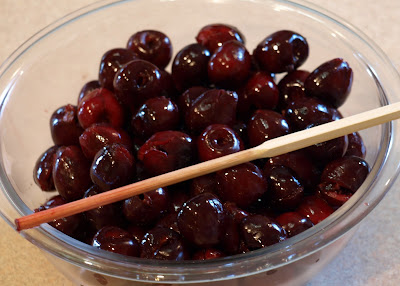 When the time came to worry about pitting the cherries, I decided to google it as I do many questions. I found a suggestion for using a chopstick! Wow, I actually had some of those. I held the cherry in my left hand with the end opposite the step against my thumb and forefinger-making a space for the pit to emerge. I held the chopstick in my right hand and pressed it through the cherry. It worked very well. I did have to wipe some cherry juice splatters from the backsplash and later scrub my stained fingers! 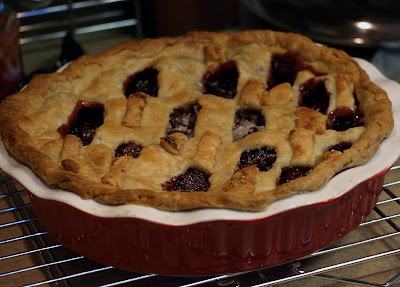 We cut it while it was still warm and a bit runny, but it was oh so good! I will have a difficult time going back to cherry pie filling now! The strange pattern on the pie crust is a result of my getting distracted by my sweety and forgetting to dot the filling with butter BEFORE putting on the top crust! So I cut little holes to slip in the butter. I love pie crust to I just folded it over instead of removing it! If anyone has any suggestions for keeping the crust from shrinking from the sides of the pie dish, I would love to hear them or is this normal? I haven't really noticed it on other folks' pies.
Recipe from Myra Starkey in the Victoria Advocate
Pie Crust
1 1/4 cups flour
1/4 tsp. salt
1/2 cup butter (chilled and diced)
1/4 cup ice water (very very cold)
In a large bowl, combine flour, salt and then cut in butter pieces until mixture resembles coarse crumbs. Stir in water, 1 Tbsp. at a time until the mixture forms a ball. Wrap in plastic wrap and refrigerate at least 3 hours before rolling on a floured surface. Remove from plastic wrap and roll a little over half the dough to fit a 9-inch pie plate. Place crust in plate. After filling, roll out the second crust and place over the first crust. You can brush edge of crust (on bottom) with egg wash before placing top crust, then flute edges to seal crusts together.
Fresh Cherry Pie
1 pie crust
4 Tbsp. instant tapioca
1/8 tsp. salt
1 cup sugar
4 1/2 cups pitted cherries
1/4 tsp. almond extract
1/2 tsp. vanilla extract
2 Tbsp. butter
Preheat oven to 400 degrees. Place foil over a cookie sheet to use in case of spills while baking. Place bottom crust in pie dish. In a large bowl, mix tapioca, cherries, salt, sugar, and extracts. Allow to sit for 30 minutes. Pour cherries into pie crust and dot with butter. Place other crust over cherries and flute edges. Cut vents in top to allow steam to escape. Brush crust top with egg wash (egg beaten lightly). Bake for 50 minutes and then allow to cool before eating.
I mixed the cherries etc. together and let it sit while I rolled out the pie crust. Also, I don't really trim off any of the crust. I folded it over and smushed it together. I have also just folded it over like a tart when not using a top crust. Like I said, I can't bear to waste that yummy crust. My mother-in-law makes pie crust cookies out of her extra crust. She sprinkles the pieces with sugar and cinnamon I think!
Ya'll Come Back,
Lorilee