Brian has been begging for a kitten for some time now. His Dad said absolutely NOT. We waited and bided our time. Today was our time! Dad agreed to go to Adopt-a-Pet to look at the cats. They didn't have any kittens ready for adoption, but this kitty came forward and introduced himself. He politely asked to be petted. He won Dad over first! Dad told Brian that if he didn't choose this kitty, HE would get the kitty for himself. Brian also liked a sweet slightly younger longer-haired female. Brian was won over when he sat on the floor and this big kitty started licking and rubbing his mouth on Brian's finger. We had to leave him so the vet could remove a small cyst on his shoulder. Brian took this photo with his cell phone to be able to show his brother. 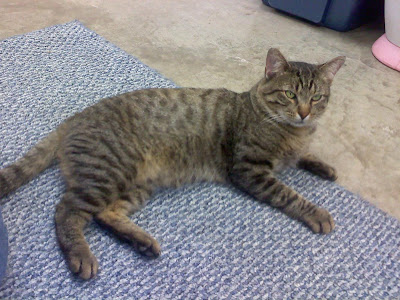 He is a handsome kitty. He is a big boy with large paws to go with his big personality! Dad and Brian want to call him "Beast".

We will introduce him to Honey and Lexi (the dogs) tomorrow. We have always gotten kittens in the past. We decided that a young, yet nearly grown cat would be a good thing with two dogs. He will be able to better stand his ground!