Bobcat in my yard! 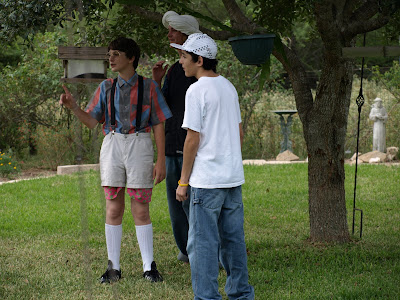 We were having a fairly normal Sunday afternoon around here! Brian had several friends over. They were working on a school project. It was some kind of video for their Health class. The young man is the shorts is supposed to be a "nerd". My son, in the turban, is the genie. That is about all I know about the "script". 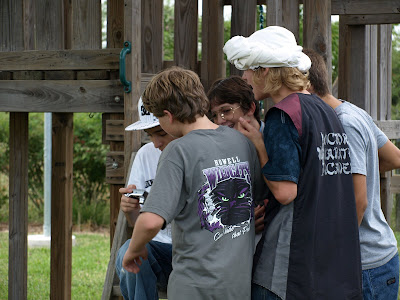 They "filmed" and watched and laughed. They laughed a LOT! 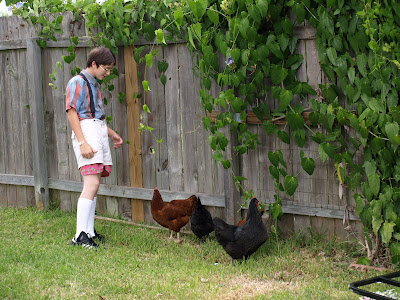 Since we were spending time outside, I decided to let the girls out for some exploring. Luke was tickled by their antics! The boys thought it was funny when the girls slipped into the scene! All was well! The boys and I were on our patio, and they were showing me the video they had done so far. Three of the chickens came squawking and almost flying from behind the barn. I jumped up and ran toward the garden area thinking that our little dog, Lexi, was chasing them. 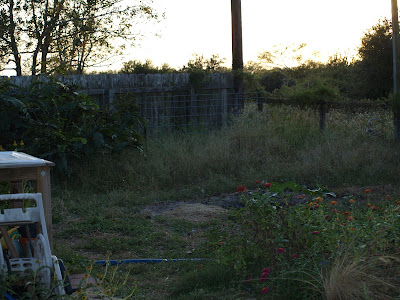 I had not seen the fourth chicken with the rest. As I came around the barn, I saw a LARGE bobcat jump onto this fence with Lucy in its mouth. 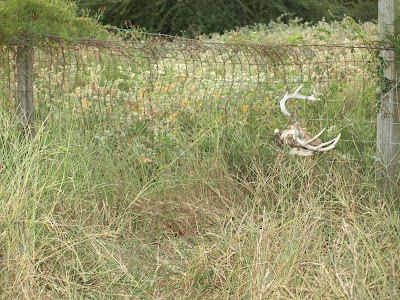 I screamed! The boys were right behind me. One of them went to get David. We stood there a moment or two with our mouths hanging open with shock. 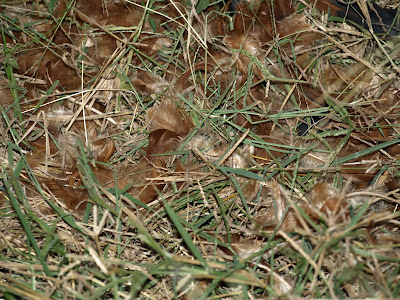 This is what we found in garden. There were feathers everywhere. Then we heard a squawk in the pasture. Brian took his shotgun and followed the sound and trail of feathers. (The pasture is out of the city limits.)The bobcat must have lost its grip on Lucy. She had run into some of the rosehedge. The bobcat was still after her though. Brian shot at it, but he missed. He found Lucy in the rosehedge and hollered to us that he thought she was still alive. He looked up to see the bobcat staring at him. He shot at it, but he didn't have the gun cocked. He cocked and shot again as it ran away. I went out in the pasture to try and get Lucy to come to me, but she wouldn't move. Finally, the guys got our tree branch loppers and cleared out some of the rosehedge. Lucy then came out. She had a tooth puncture on her neck along with many missing feathers. We found a handful of other bloody spots, but none seem too deep. It was amazing that she was even alive at this point. I put medicine on her wounds. She is in the coop with the rest of the girls. I sure hope she gets well. If she makes the night, I will get some medicated feed for her tomorrow to help prevent infection. Now we are thinking that a bobcat might explain the disappearance of our cat, Harley, last Christmas. We are also a bit worried about our little dog. I still can't believe a bobcat came into our yard in broad daylight WHILE we were outside!