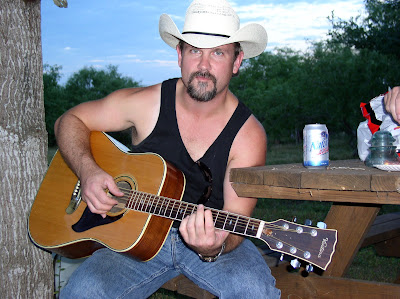 I found this on Carla's blog http://amellowlife.blogspot.com/ . I thought I would share a bit more about my sweet husband. I don't want everyone out there to think he always looks like the creature in the mask that I posted!
1. He's sitting in front of the TV: TAPS or MonsterQuest
2. You're out to eat: what kind of dressing does he get on his salad? Ranch
3. What's one food he doesn't like? Okra
4. You stop at a store, what drink does he buy:) A Monster
5. Where did he go to high school? Victoria, TX
6. What size shoe does he wear? He wears 10 1/2
7. If he was to collect anything what would it be? The Lord of the Rings figures,hats, Star Trek figures and models, anything related to trains.
8. What is his favorite color? He likes to wear Black!
9. What would this person eat every day if he could? Chicken Fried Steak
10. What is his favorite cereal? He eats whatever I buy!
11. What would he never wear? Not sure. He once wore a kilt to The Texas Renaissance Festival!
12. What is his favorite sports team. He doesn't follow any sports! He has always been a huge Genesis and Phil Collins fan though!
13. Who did he vote for? Let's just say he is a huge Rush Limbaugh fan and Bill O'Reilly fan.
14. Who is his best friend? I hope he would say that I am his best friend.
15. What is something you do that he wishes you wouldn't do? He claims that I snore. I don't believe him!
16. How many states has he lived in? Always lived here in Texas.
17. What is his heritage? German, Irish, Scottish
18. You bake him a cake for his birthday; what kind of cake? Chocolate Cake with Chocolate frosting.
19. Did he play sports in high school? NO--He played guitar!
20. What could he spend hours doing? Watching TV and playing guitar and mandolin. 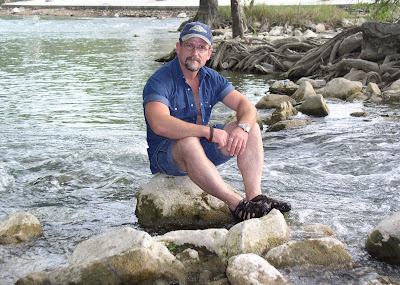 Here he is on the Guadelupe River in Gruene, Texas. We went there several years ago for our anniversary!